…
When we first found out we were moving to London for a year, we expected to be running off to European destinations at every possible opportunity. In fact, though, we have found ourselves exploring England, seeing places we wouldn’t get to on a regular vacation, and enjoying a slower pace. This time we returned to the sea, to the county of Dorset and more particularly the area that is a UNESCO heritage site known as the Jurassic Coast.
We booked a B&B in Swanage, which turned out to be a good home base. Our hosts at the Sandhaven B&B were delightful, and we enjoyed galleries and shops, a good Italian restaurant, local seafood, a hidden little cafe/chocolate shop, and the long beach and promenade. Pictures? Apparently I only pointed my camera out at the sea! 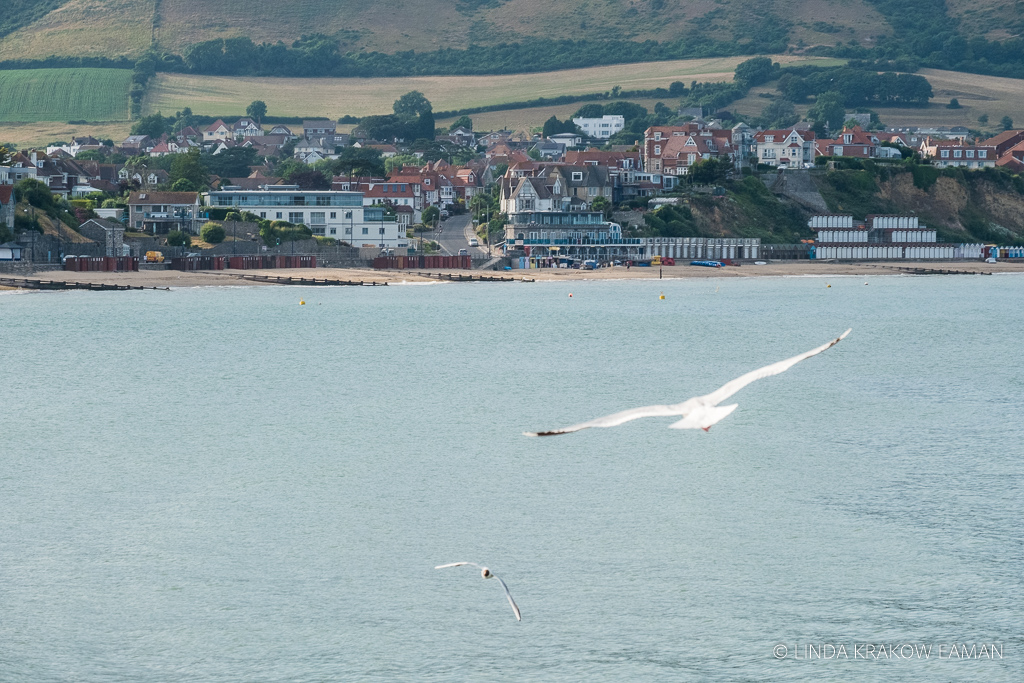 A bit of the view from the top deck of the seafood restaurant in Swanage, looking across the bay at the beach huts. Our B&B was about half way up the road on the hill. 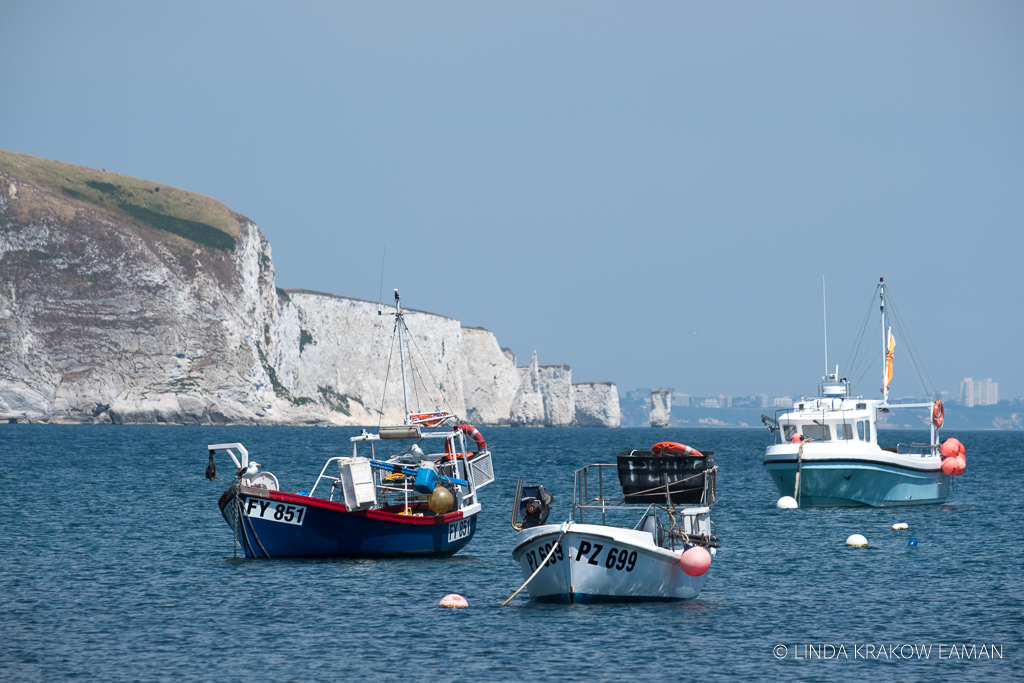 Fishing boats in the harbour at Swanage, with Old Harry Rocks and the buildings of Poole in the distance. 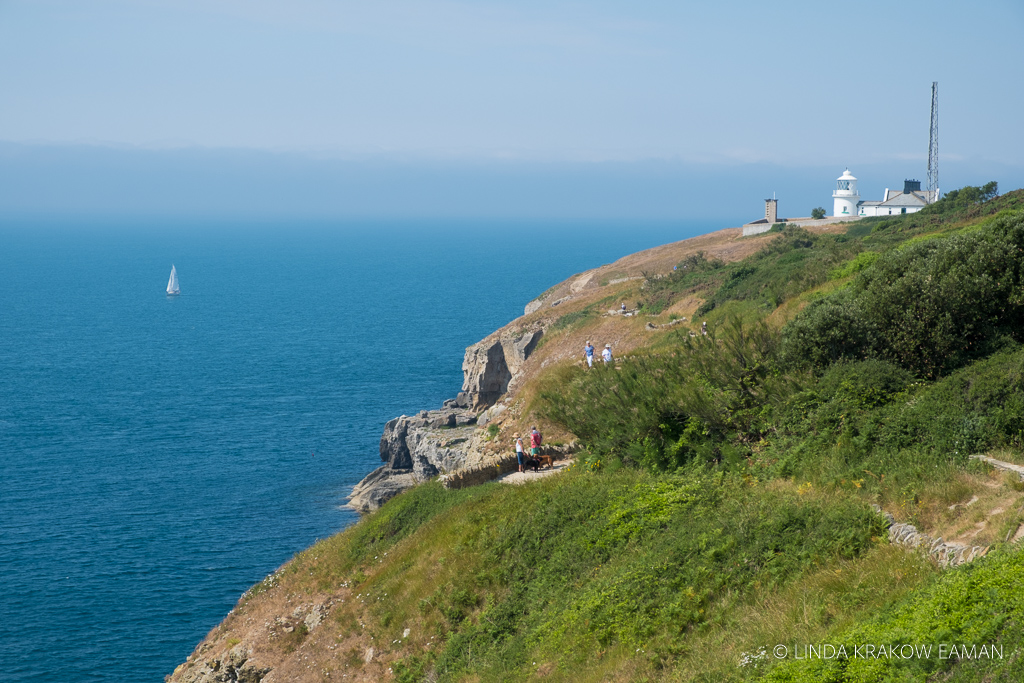 On the outskirts of Swanage, Durlston offers a cafe and art gallery in an old castle, and a cliffside walk where we caught a glimpse of kestrels flying to and from their nest on the cliff, and guillemots on the water below.

Corfe Castle
One of the jewels in Dorset’s crown is Corfe Castle, which includes both a ruined castle and the village below it. Dating back a thousand years, the castle was severely damaged during the English Civil war when parliamentarians (temporarily) ousted the monarchy. (It’s an interesting period in England’s history. See https://en.wikipedia.org/wiki/English_Civil_War for a brief overview.)  The village is a bit touristy but quaint and pretty.  The uncomfortably hot and humid weather kept us from checking out the views from either of the two adjacent hills, but I think that would be worth doing. 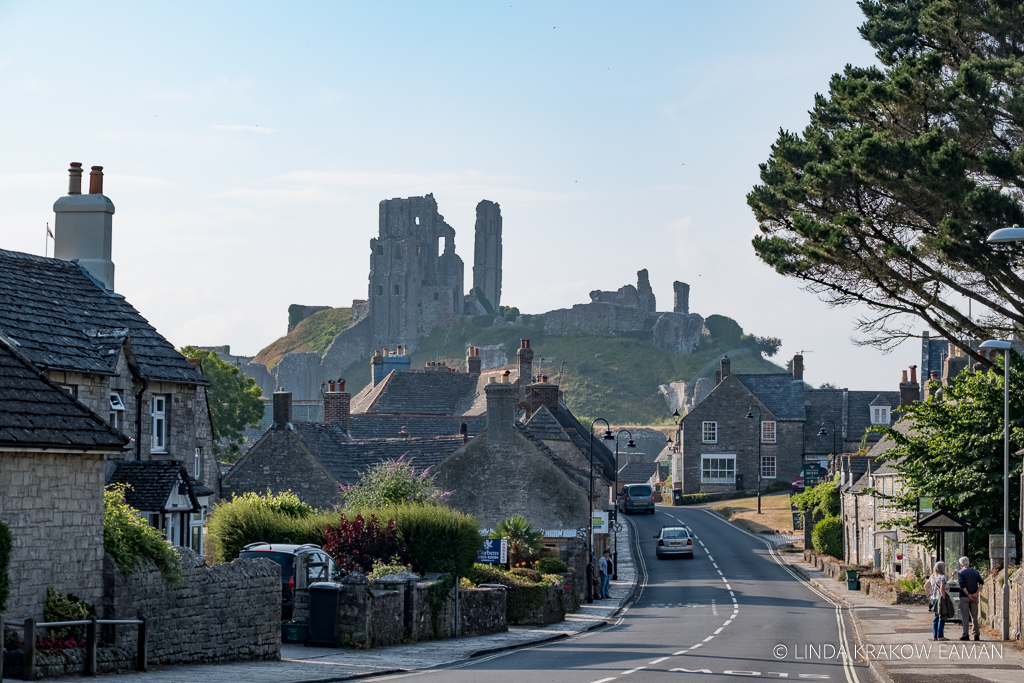 The Corfe Castle ruins overlook the town and its old stone cottages. 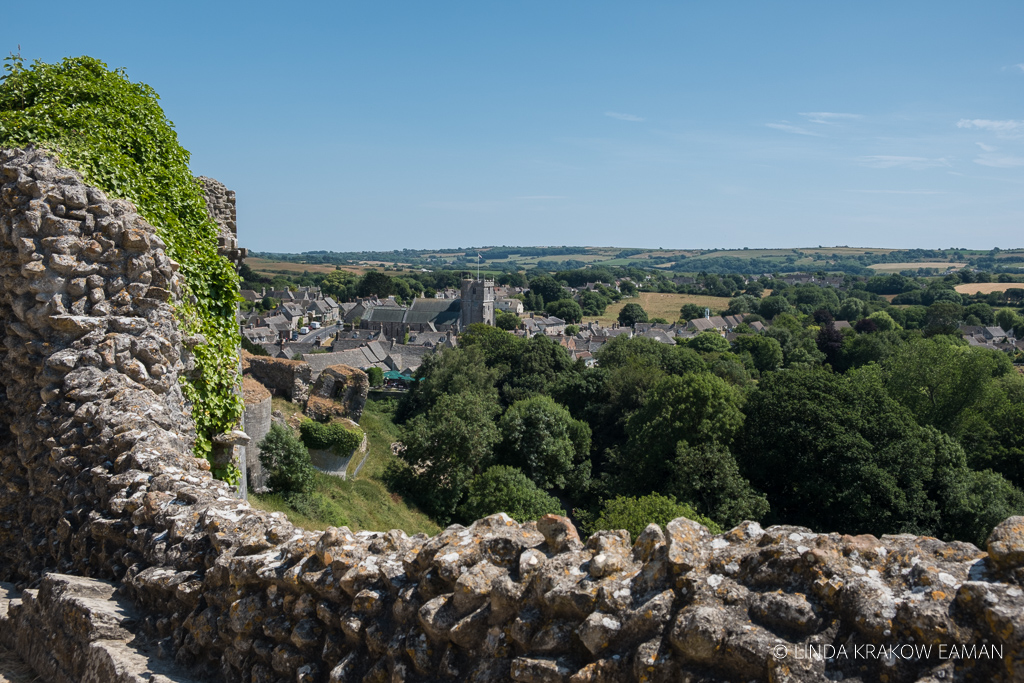 The view from the castle. Modern life goes on below, in surroundings rich with history. 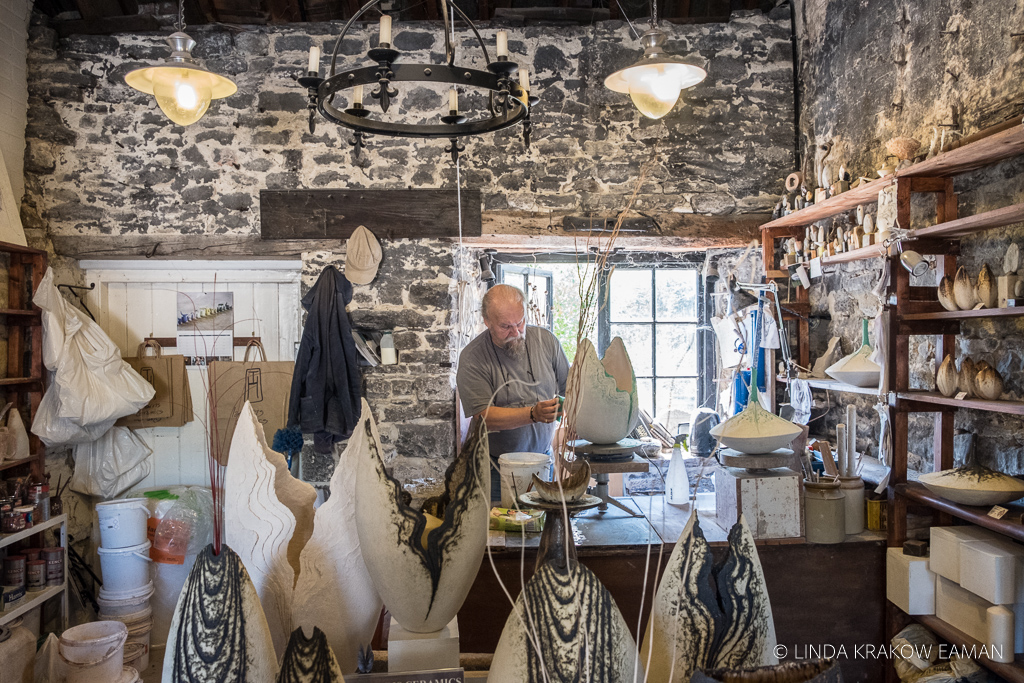 Ian Harris makes spectacular ceramics in one of the oldest buildings in Corfe Castle, the medieval blacksmith’s forge that is his workshop and gallery. The building is as remarkable as his art; you can still see the wattle and daub in places on the walls, and he displays the old anvil and other reminders of the building’s past. https://ianharrisceramics.co.uk/gallery/

Steam Trains
Swanage is home to a steam railway which does several daily runs through Corfe Castle. Dedicated people are preserving and operating as many as 150 or more of these throughout the UK. (See Islands, Puffins, and the Hogwarts Express for a bit about the Jacobite steam train in Scotland.)  At the Corfe Castle station we were invited into “the box” to see the signal and track controls. The Swanage and Corfe Castle stations are set up as they looked a century ago, with old suitcases on carts, fireplaces and Victorian furniture in the waiting rooms, and vintage ads on the fences. It feels a bit like going back in time, and they’re interesting places even if you’re not a train buff! 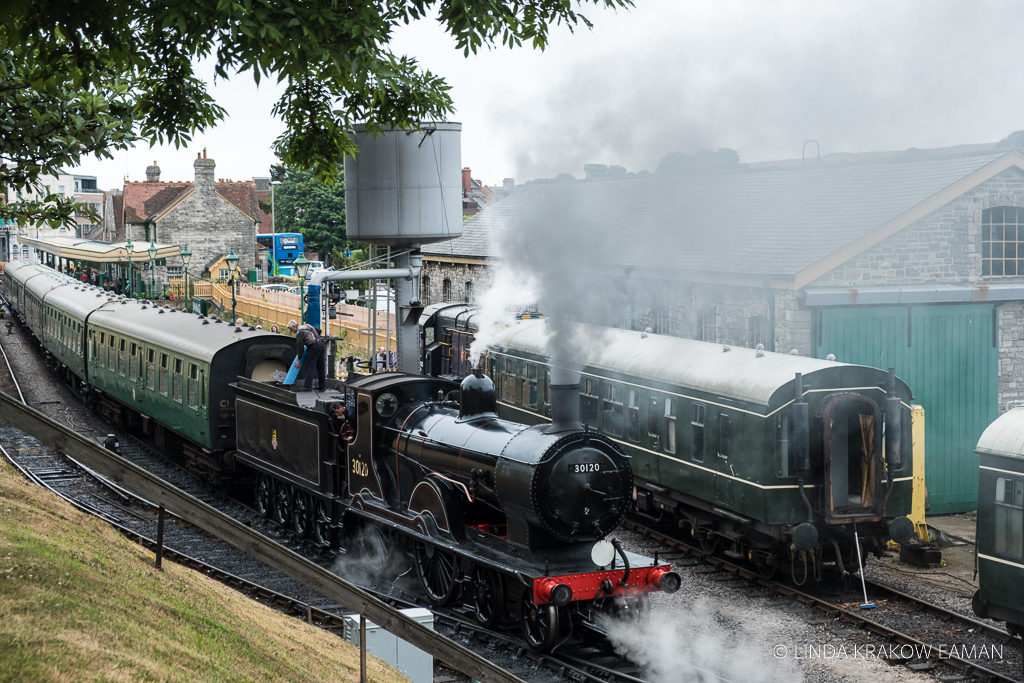 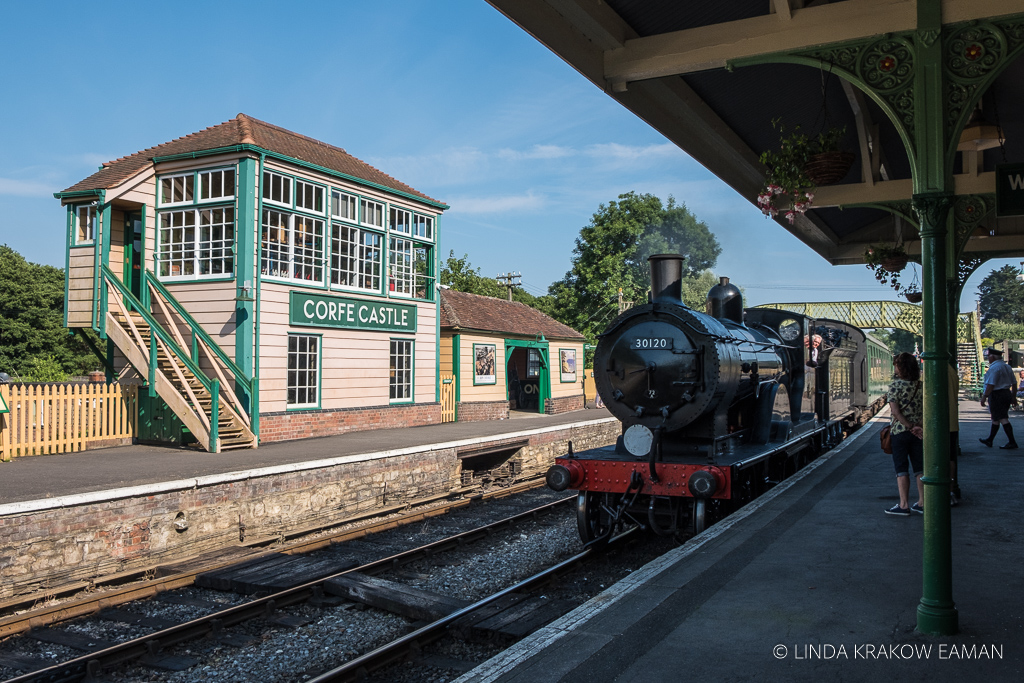 The train arriving at Corfe Castle 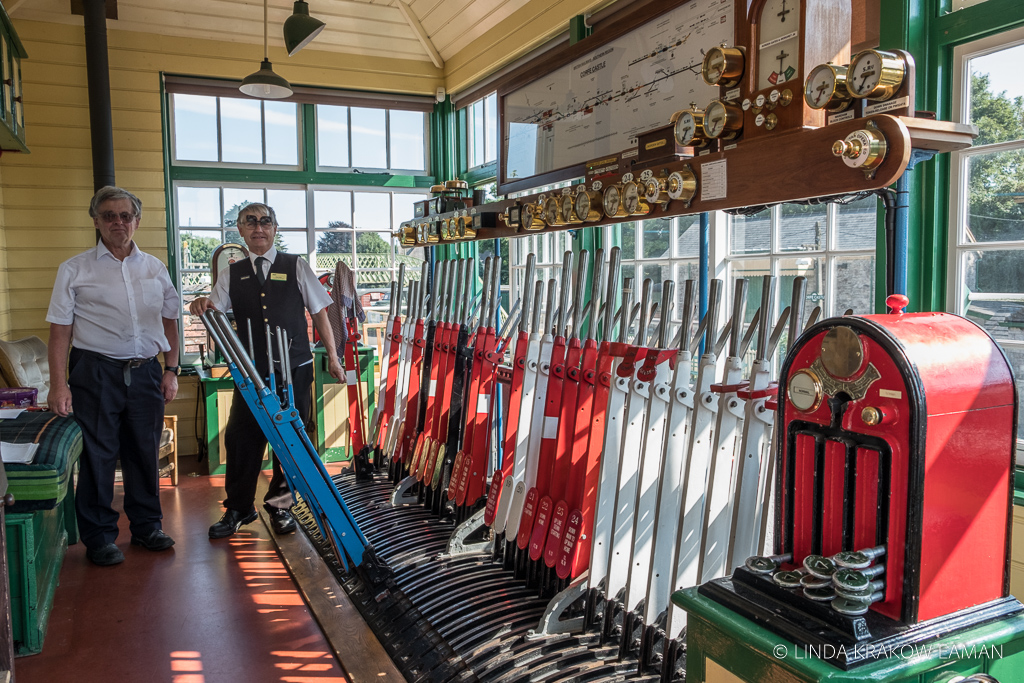 Inside “the box” at Corfe Castle station

Old Harry Rocks and Durdle Door
Don’t you love the names?  A 2.5 mile hike along the coast from Swanage brings you to  the chalk cliff formation known as Old Harry Rocks.  This was a highlight of our week, so beautiful that we went twice. On a hot, humid day, it’s a good spot to catch a breeze, sketch, and enjoy the birds and wildflowers. 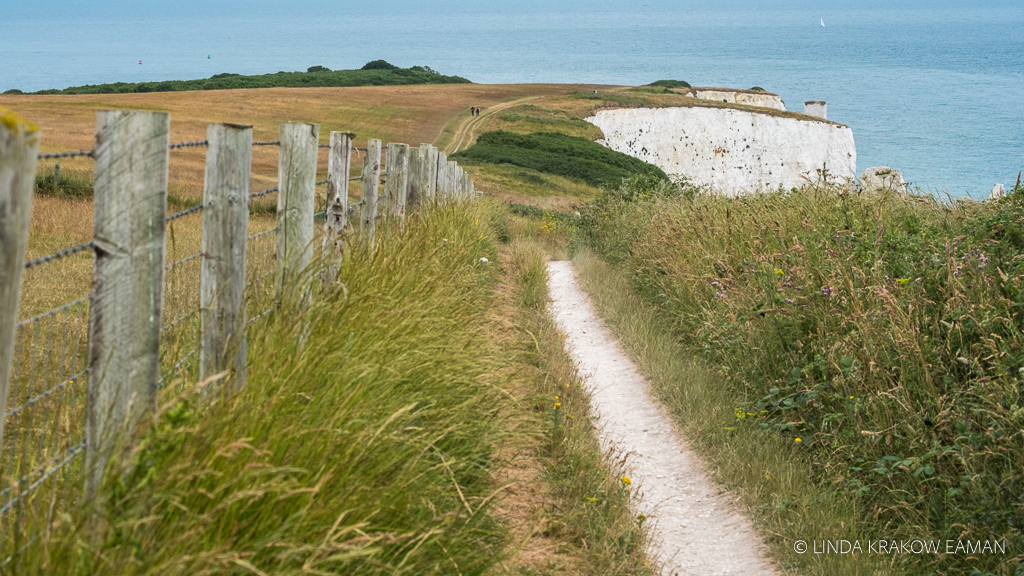 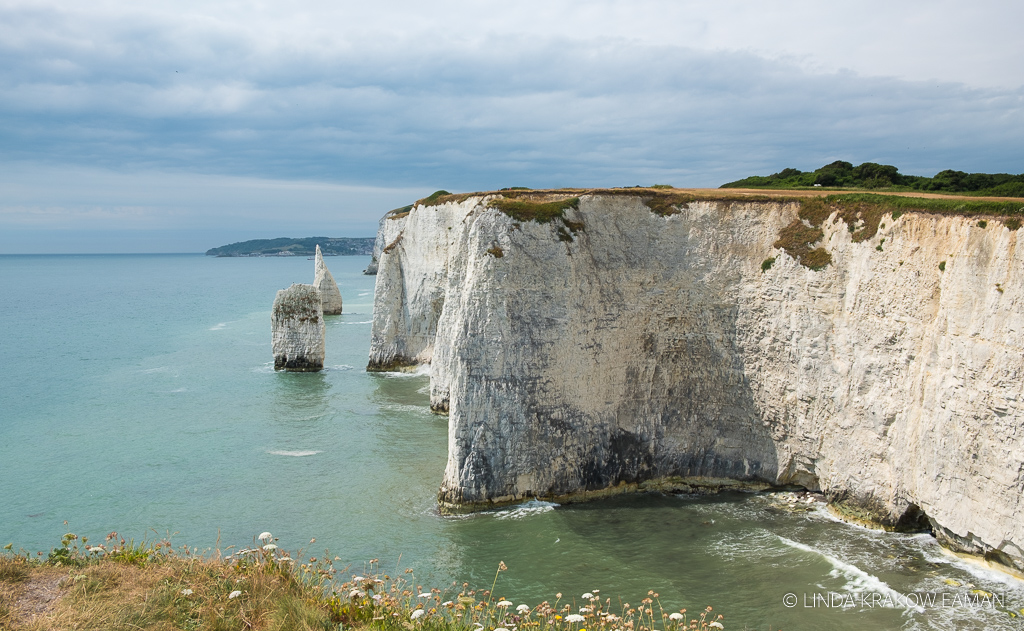 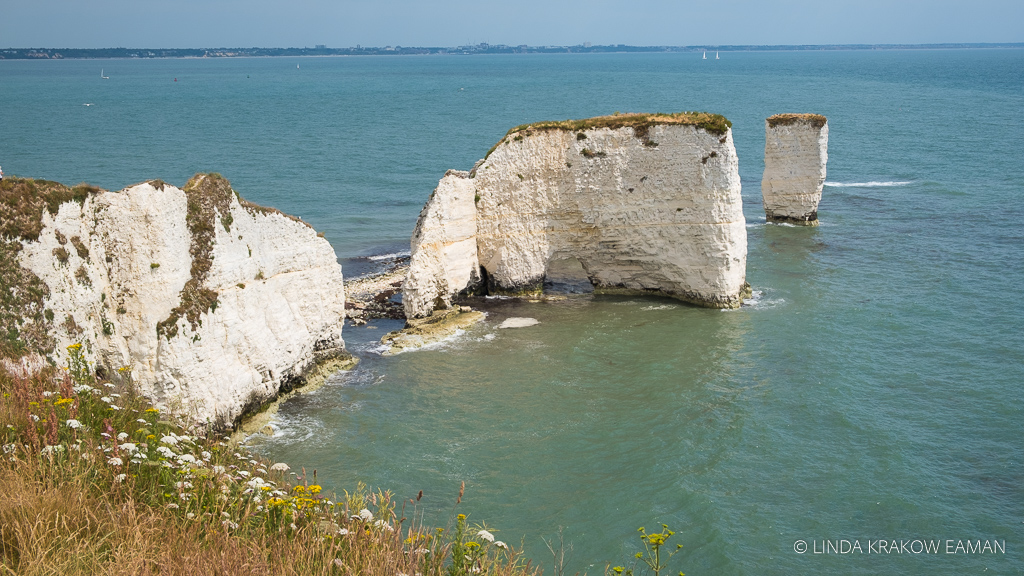 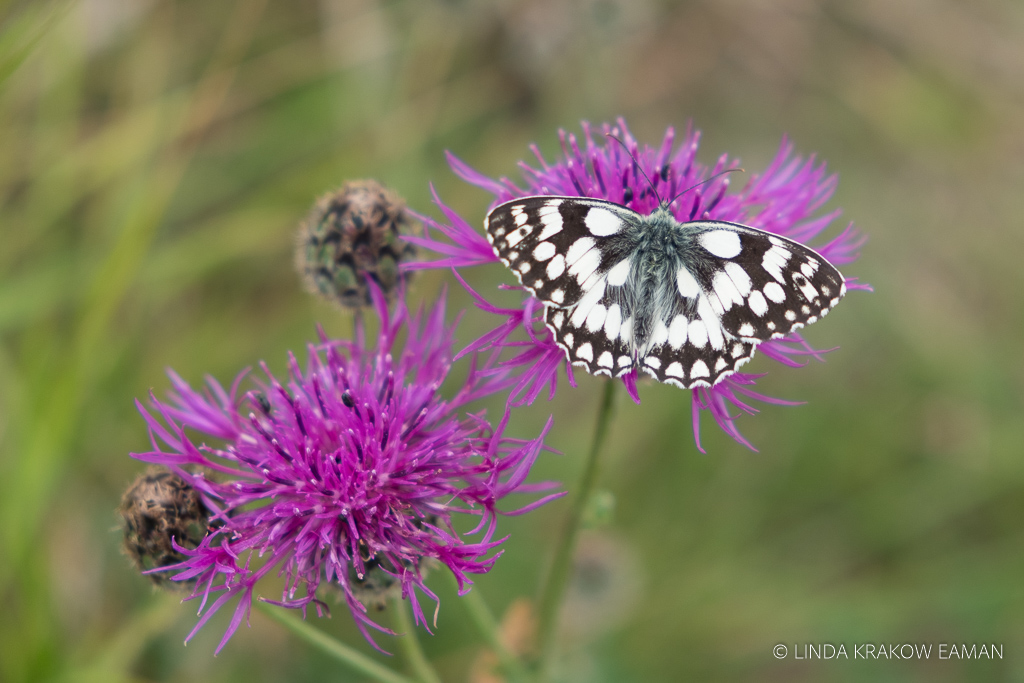 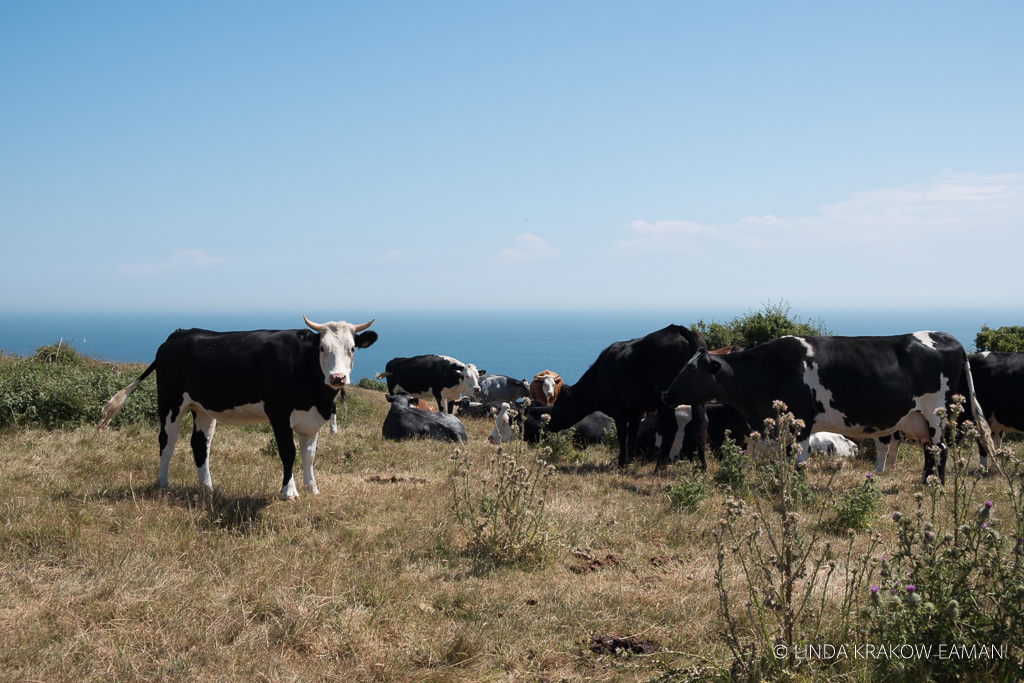 Walking paths go right through grazing fields… you’re just expected to be respectful of the animals. These cows have a pretty spectacular view!

Another mile past Old Harry Rocks brings you to the village of Studland and, of course, a centuries-old pub that’s perfect for lunch! There’s also a nice sandy beach (and public toilets, in case you’re taking notes for a future hike.)
* If you want to do this as a day trip from London, you could take the train to Poole and walk to the ferry which takes you to Studland, then hike from Studland to Old Harry Rocks (and beyond). There are also buses all around the area, so you don’t have to hike back if you don’t want to!
A short drive away are more landmarks with evocative names, including Man O’ War beach, Lulworth Cove, and Durdle Door.  And here we met the infamous marine mist.  It was a hot but beautiful day just a mile away, but apparently the ocean makes its own weather. It was still hot here, but foggy and gray. 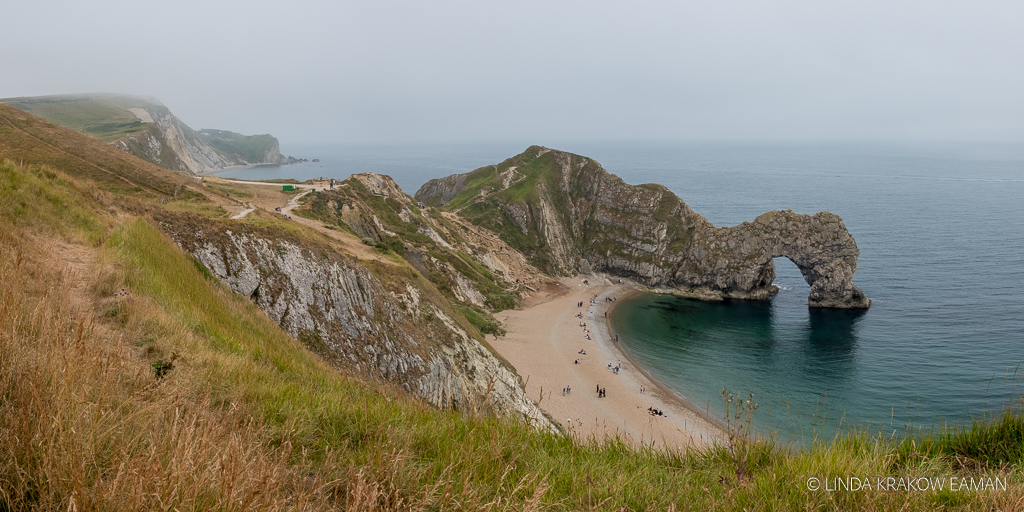 Durdle Door and the marine mist

Postcard-Perfect Villages
One of the things I love here is the lack of sprawl and commercialism, at least outside of the cities. (England is not without suburbia, malls, and giant parking lots, but they seem to be better contained.) The first things you see as you near a village are houses, or maybe a pub. Sheep. A farm. No car dealers, Walmart, or McDonald’s. Yes, some of the towns have fast food restaurants but they’re discreet storefronts and there’s no such thing as a tiny Taco Bell with a huge parking lot around it.  So traveling from village to village is absolutely lovely. Preferably done on foot or by bicycle, but lovely even by car.  Don’t miss the plethora of signs indicating the footpaths that invite walkers to cross the fields to reach the next destination.  The villages are just the right distance apart so there’s always somewhere up ahead for lunch or a drink or a bathroom.  And even the smallest village seems to have a corner with a red phone booth, a red mailbox, and a defibrillator.
Worth Matravers is one such village. You park in the lot on the edge of town and walk in.  It’s just a small group of houses surrounding a pond that was once the villagers’ source of water (the old pump still stands nearby), a tearoom, a church, and the village hall (formerly the schoolhouse). Up the hill from the main village sits the Square and Compass pub with low ceilings and cozy seating areas inside, and an inviting outdoor space with a sometimes fogged-in view of fields and the sea. The only food served is pasties on paper plates, so it’s a good place for a beer and a snack, rather than dinner. A side room  displays an impressive collection of fossils from the area. 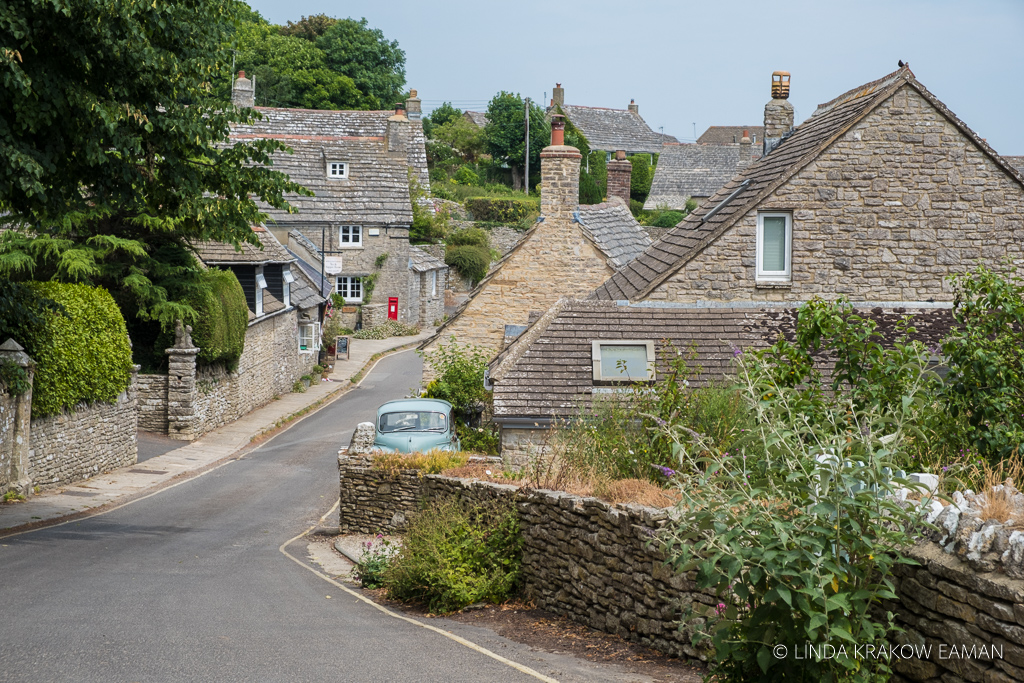 Worth Matravers. Notice the red mailbox built into the stone wall in the distance.

Kimmeridge is another tiny, postcard-perfect village. Dorset is sprinkled liberally with beautiful stone cottages with thatched rooves, and at Clavell’s restaurant you can sit at an outdoor picnic table with a good lunch and enjoy a view of some gorgeous ones. 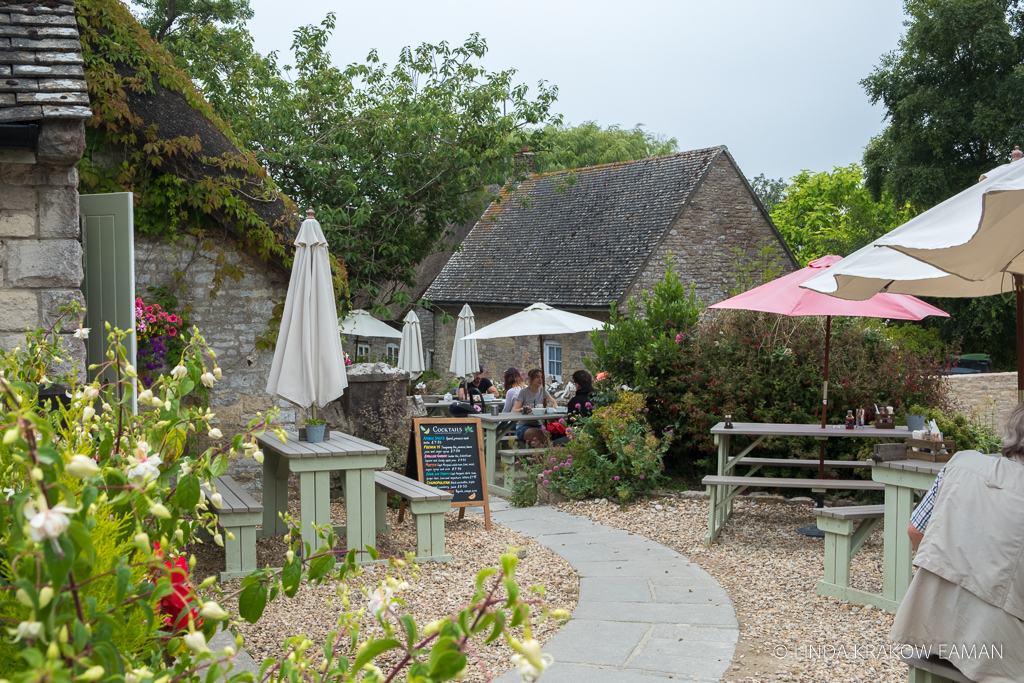 Clavell’s restaurant, in a thatch-roofed stone building that was once the village post office (mail is still collected there, from a red mailbox built into a stone wall). On a hot summer day, overcast skies and umbrellas were appreciated in the outdoor seating area! 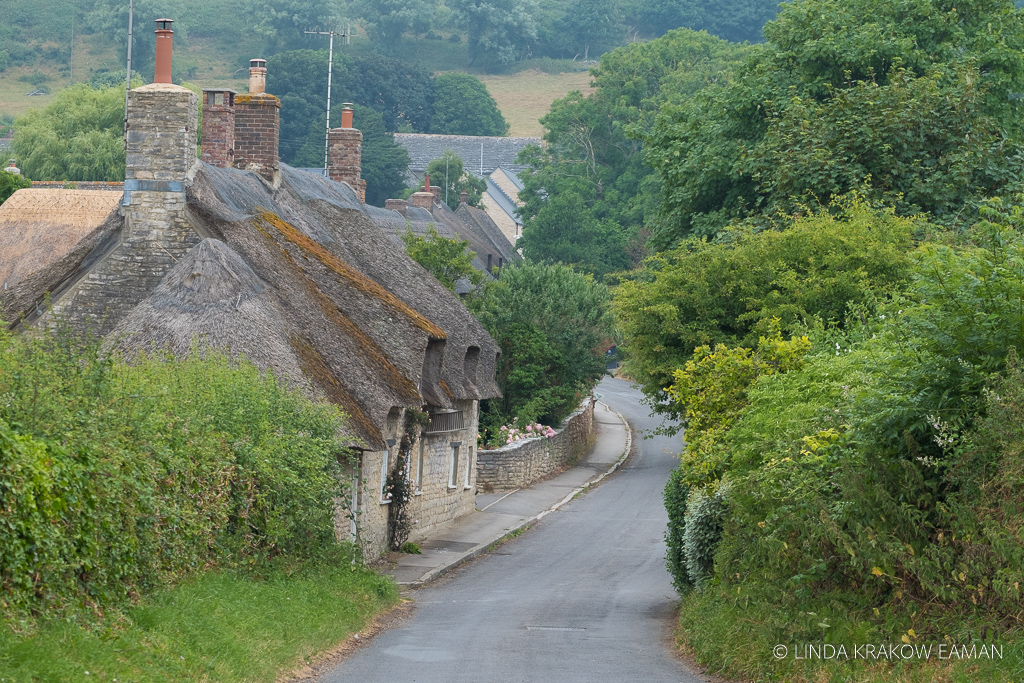 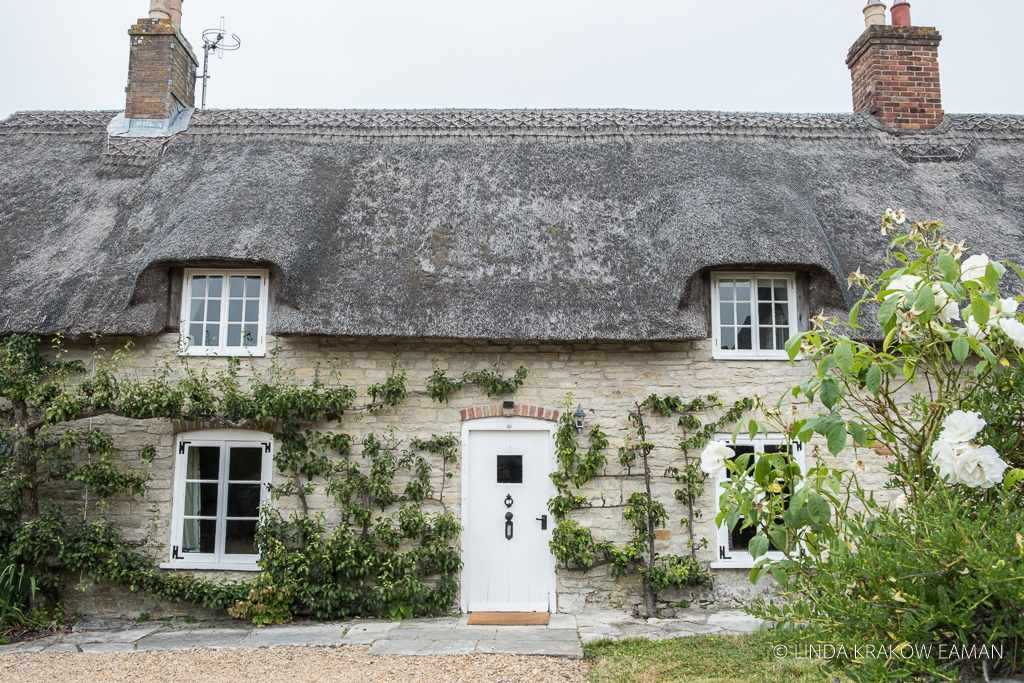 At Kimmeridge, we also made our way to the beach to see the layered cliffs–here they are not white chalk but layers of varying colors.  And this is famously a place to find fossils; we saw one underfoot. Signs say “no fossil hunting” and anything found must be left in place. 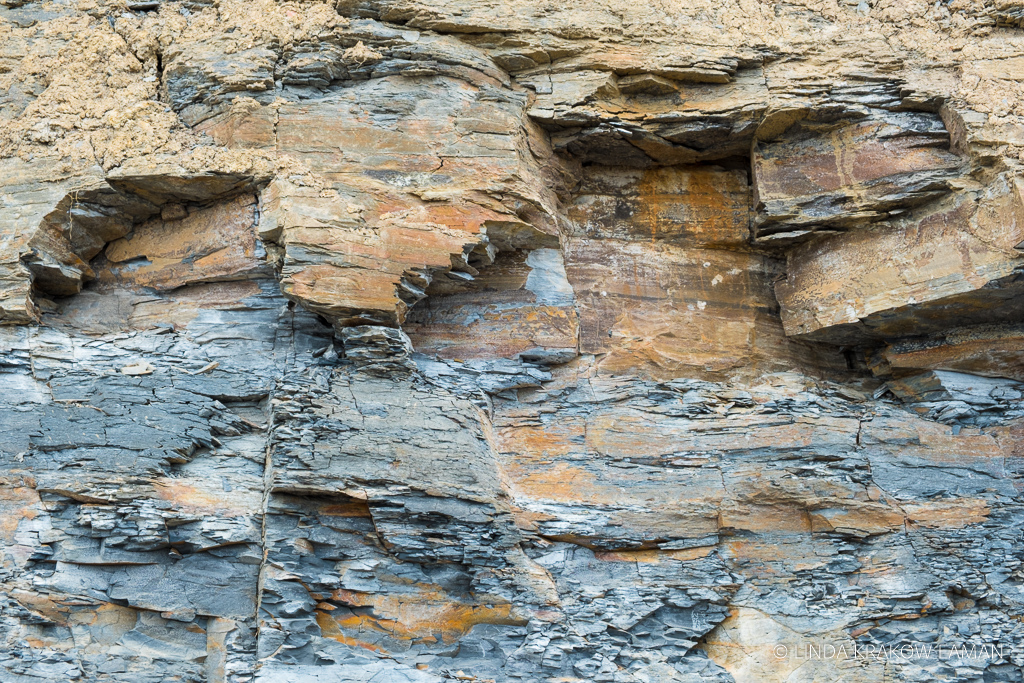 The layered cliffs are like abstract paintings, reminding me of the pigments in my watercolour box. 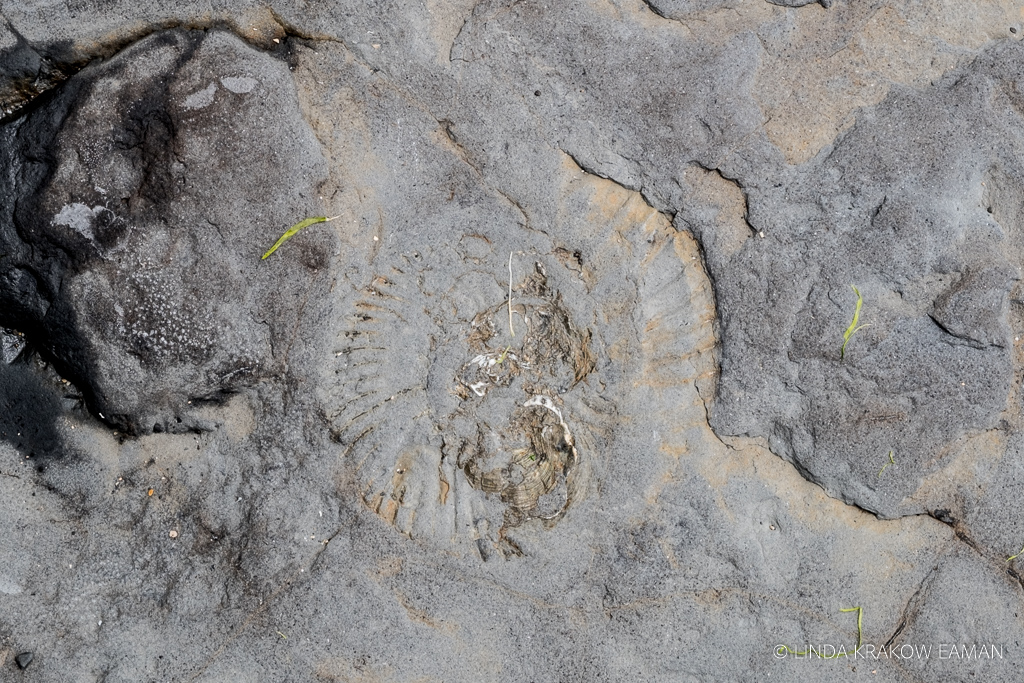 A fossil at Kimmeridge bay on the Jurassic coast

In addition to the natural formations, there are remnants of World War II. Many villages on the coast were evacuated for use by the military, and pillbox bunkers stand in varying degrees of decay near the beach at Kimmeridge. With regret, we didn’t get to Tyneham, a village that was never re-inhabited after being used as a training zone. Like much of the nearby land, it still belongs to the army. Signs indicate that several roads and footpaths in the area are closed at times during exercises.
Weymouth and Portland Bill
We could easily have spent more time in Weymouth!  We drove past the beach and promenade area, which seems to be a typical English seaside crowded with summer visitors, and set out to explore the picturesque old harbour.  With a mix of fishing boats and pleasure craft (although the large marina is around the bend), it’s a colourful scene. As he cleared our cups and folded away the waterside table and chairs for the day, a cafe owner offered a brief history lesson that went back to the 1200s and included Queen Elizabeth the First (the 1500s) when the two sides of the harbour were different towns. The bascule drawbridge, built in 1930, is raised several times a day and we watched a parade of sailboats make their way through. 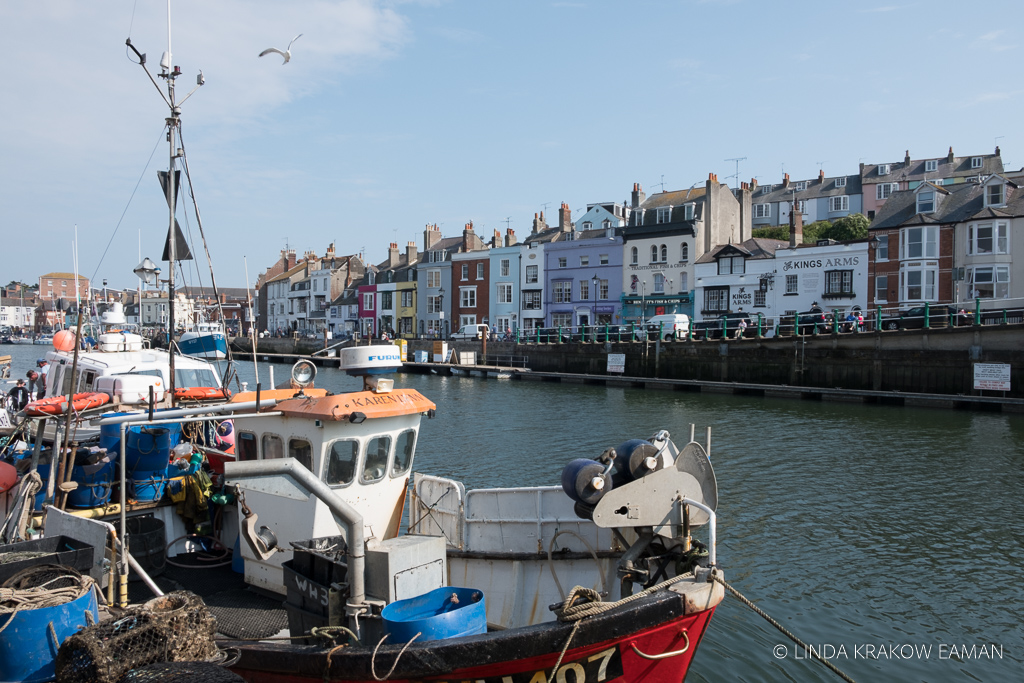 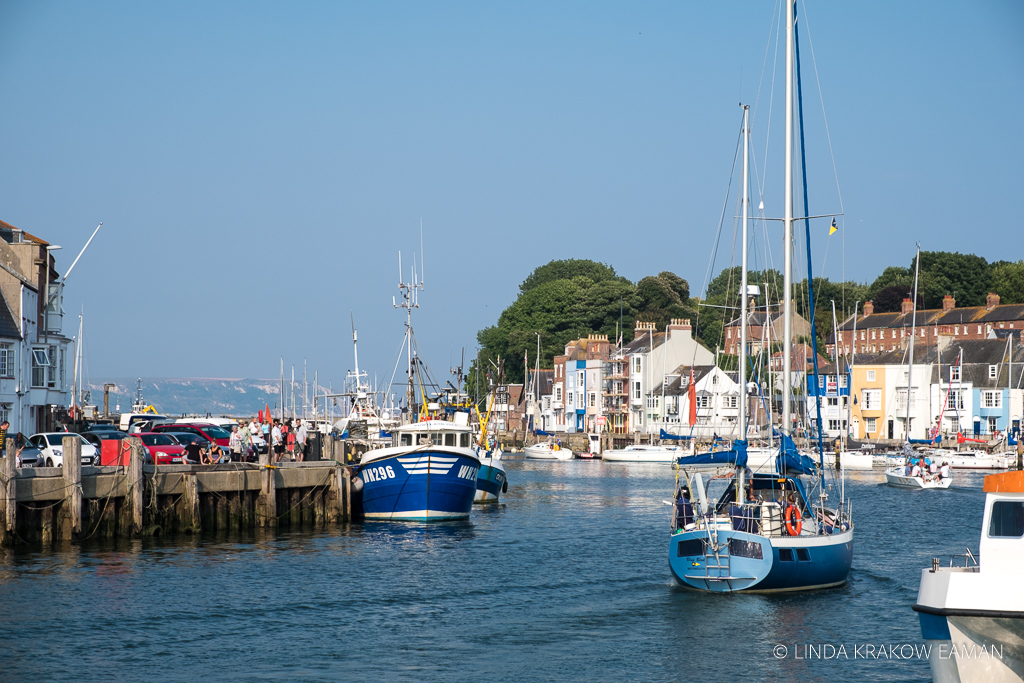 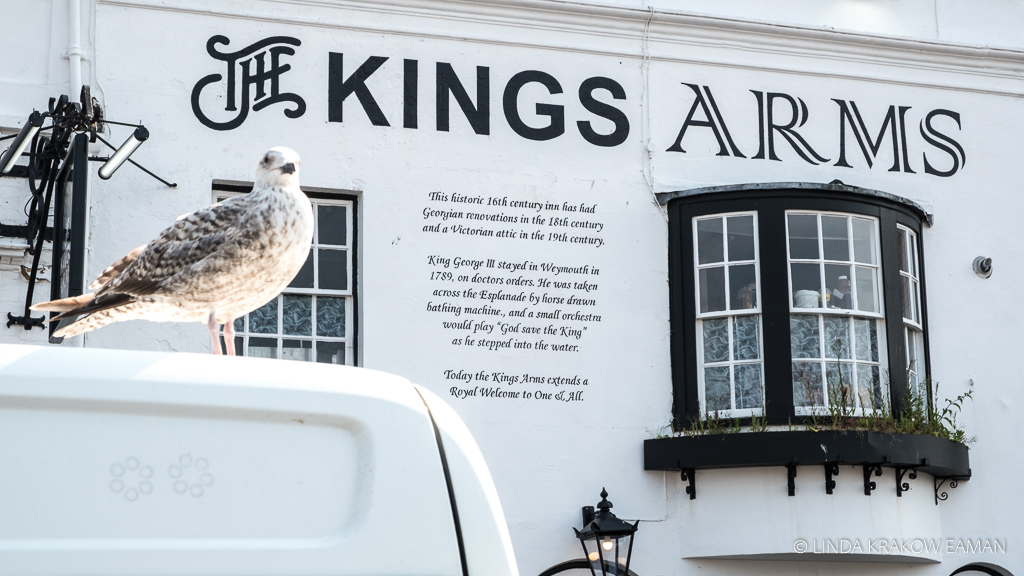 The inscription on the building reads: “This historic 16th century inn has had Georgian renovations in the 18th century and a Victorian attic in the 19th century.
King George III stayed in Weymouth in 1789, on doctors orders. He was taken across the Esplanade by horse drawn bathing machine, and a small orchestra would play “God save the King” as he stepped into the water.  Today the Kings Arms extends a Royal Welcome to One & All. “ 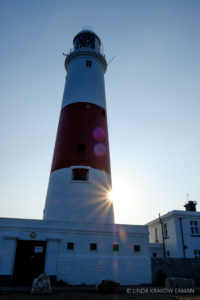 From Weymouth it’s a short drive out to the peninsula and the red and white Portland Bill lighthouse. If you don’t arrive after hours as we did, you can climb the lighthouse tower and visit the displays.  Expecting the usual gorgeous coastline, I was surprised to discover that the beach around the lighthouse is a jumble of rocks, many of the natural features having been destroyed over the years by quarrying. This area is the source of Portland Stone, the limestone with which many London buildings including St. Paul’s Cathedral were constructed.
The Jurassic Coast continues Westward, going through places like Lyme Regis, used by Jane Austen as a setting in her novel “Persuasion.” But our time here was up and after a brief visit with family in nearby Poole, we were back at the station waiting for the train to London. I hadn’t thought of a trip to the seaside as a history lesson, but as always here it turned out to be a walk back in time. The namesake Jurassic period. The mariners and conquerors who built the harbours and castles a thousand years ago. The  Victorians who knew they had found a good thing when they created the seaside promenades and hotels by the shore. I doubt much of this is on the minds of the people who flock to the beaches as soon as the weather warms up, though, and that’s OK!  As a day trip or a longer getaway, this is only a few hours from London, and the perfect summer outing.

2 thoughts on “The Jurassic Coast”

This site uses Akismet to reduce spam. Learn how your comment data is processed.